The full moon lit the way as I slowly and quietly made my way along the edge of the tree line. The moonlight made it easy for me to locate a landmark which designated the spot where I needed to be before the rise of the sun. I found a nice tree to sit against and settled in the soak up the beauty of the Ozarks that the morning was about to unveil.

The hoot of an Owl echoed through the valley and was answered by the thunder of a gobbler. The Boss of the Eastern Wild Turkeys has claimed his kingdom. However, several challengers sounded with impressive gobbles of their own throughout the White Oak forest. Whippoorwills gave their evening farewells as the hints of the Missouri sunrise began to glow. Owls hooted to each other in the tree tops as the knock of a Woodpecker signaled that morning has arrived.

My media host Ray Eye called me with the invite to hunt Eastern Gobblers in Southern Missouri and Tony Caggiano of World Slams Adventures coordinated all my travel arrangements. World Slam Adventures is a full service “Cast and Blast” travel agency. I had no idea how to get to where I needed to be. I am so glad that I was able to hook up with World Slam Adventures. Tony made sure I had everything I needed and made sure that I was well taken care of. He also did all my reservations and confirmations. He kept constant tabs on my travel itinerary and kept me up to date. The flights and travel to Southern Missouri and back to Kona were PERFECT. I had no problems and it made flying pleasant. I highly recommend that if you are planning a hunting or fishing trip contact Tony at World Slam Adventures for a complete 5 star service.

Going on a hunt with my media and turkey hunting mentor Ray Eye is always a fun time. You know there will be tons of food and laughs. Oh and also a hunting experience of a lifetime. Ray told me we were filming a spring turkey hunt in Southern Missouri hosted by John Plummer of True Pursuit Adventures. John manages their properties for quality Whitetail Deer and HUGE Eastern Turkeys.

I was excited not only to be a part of this media hunt, but to see the beautiful Ozark Mountains. A place that I have only read about and seen photos that could not do this place justice.  Ray told me who else would be a part of this media event and I was looking forward to seeing friends I have not seen in a while and to meeting new people. Ray told me that I would be hunting with his brother Marty on the first morning. Marty and I have been friends for a long time it would be great to see and hunt with him again. He is a master guide and turkey hunter who knew how to tag these wary Easterns.  I can assure you that the night was very long and the anticipation intense as I look forward to hunting in the Ozarks.

The morning was very cold (by Hawaii standards) with the predawn temp at a crisp ear biting 42 degrees when Marty picked me up. On the drive to Fox Paw Ranch Marty shared his scouting reports with me. The plan was for me to hunt one side of a valley and Marty would be hunting in the next valley over. He told me EXACTLY where the gobblers would be roosted and the best place to set up to call. He parked his jeep and we gathered our gear. Marty did another equipment check with me and reviewed the hunt plans again to be sure that I was comfortable with the morning agenda. We wished each other good luck and parted ways.

After I got settled in my hide I studied the lay of the land. The bottom of the valley has a flat narrow pasture where cattle grazed. The side of the valley wall has a narrow base of thick vegetation and right above it a narrow line of short Cyprus trees that grew midway up the side. The top half of the valley is a healthy forest of White Oak trees. I was hoping I could call the turkeys into the pasture to give me an opportunity for a shot.

Owls hooted and triggered more gobbles throughout the tree tops. I counted 7 different locations in the valley where gobbles thundered. Across from me is the main roost tree that grew half way up the mountain side. This is where the boss bird pounded out a warning as a hen in his flock softly gave out 4 yelps. I was in a sweet spot and Marty’s scouting reports were right on the money. The caws of flying crows above me signaled fly down time will begin shortly.

I waited for the turkeys to hit the ground and the sound of wing beats told me it was time to start calling. Since the hens were silent I began calling softly. I was hammered by gobbles all around me! Oh this is sweet! Then the boss gobbler sounded and the valley went silent. The king has spoken. I yelped on my Quakerboy Rimshot glass and the boss gobbled hard. I casted several soft yelps with my QB SR Razor mouth call and the extra raspy tone made the Boss double gobble. I worked the 2 calls to sound like 2 hens and each time the boss hit me back with a gobble.

Another gobble from the boss helped me lay the binos on him. I could see a band of hens leading him down the valley through the Oaks towards me. Then a shot echoed from the valley behind me. I knew Marty had punched his tag. The echoes of the shot cause the flock of turkeys to turn and head back up the valley. The Boss Gobbler went silent.

I waited 20 minutes to let things settle down and then gathered my gear. I slowly crossed the narrow pasture to the other side of the valley. I casted a few yelps on my QB Glass and a gobble sounded off to my right along the slope of the valley. I cut the distance by 50 yards and yelped again. The gobbler sounded again in the same spot. I moved to cut the distance another 75 yards which brought me to a low saddle where the pasture ended. There flowed a very shallow narrow creek. The band of thick vegetation prevented me from moving up the slope so I stepped across the creek and stood next to a tree. In front of me is a clearing about the size of half a basketball court. I was hoping the gobbler would cross the tiny creek and step into the clearing.  It was a good spot. Not the best spot, but due to the lay of the land I had to make it work. At least I had the sun at my back. I casted a few yelps from my glass towards the clearing to fool the gobblers into thinking the hen was there. The gobbler thundered about 75 yards up the slope 45 degrees from me. I quickly sat against the tree and got set up. I casted my lucky 7 (3 clucks and 4 yelps) and I was cut off by a double gobble.

My eyes strained as I try to spot the gobbler among the shadows of the Oaks. I knew he was strutting because I could hear his wings dragging in the leaves. Movement! I spotted a glowing white dot in the shades of the forest. I slowly raised my binos to get a better look. He stood full strut in all his glory. Damn he was huge! He looked like a black Mini Cooper with the doors open. Then more movement! Another long beard stepped up. I cast the lucky 7 and they both gobbled. The boys broke strut and headed my way. I went silent and got the Mossberg ready.

I was faced to where I thought they would cross the creek and step into the clearing which would give me a 30 yard shot. Ray Eye lent me a Mossberg 535 12 gauge pump topped with a Ghost Ring Bullseye sight by Marble Arms. The Ghost Ring is very similar to a peep sight on a bow string. The front fiber optic sight makes for quick and easy target acquisition. The Mossberg was loaded with Spectra White Lighting 3 inch magnum #6s. The reduced recoil load and the factory ports on the Mossberg barrel makes shooting sweet.

I sat frozen as the gobblers reached the water and disappeared in the brush that hid the creek crossing. Any second now and it will be show time! I waited locked and loaded, but no gobblers?   I caught movement on my left. The gobblers crossed the tiny creek and walked along it directly towards me. From the sound of my calls they knew exactly where I was. They were now just 5 feet away from me, but I could not move. They were too close. They didn’t like what they were seeing and started to walk away putting. I still had no shot because of all the brush. I raised my head and the gobblers caught sight of my shadow movement and started to move quickly away. Damn! I forgot to put in my mouth call so I began to whistle a kee kee run. The gobblers ran out into the clearing and stopped. The Ghost Sight quickly found its mark and the Mossberg sounded. The White Lighting face planted him without a flop.

After thanking my blessings and a few pics I loaded the big gobbler into my vest. As I walked out to meet Marty the scenario replayed in my mind. I could not stop thinking about this awesome hunt on Fox Paw Ranch. 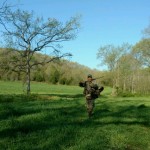 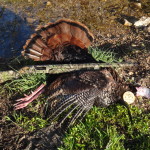 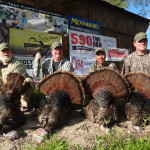 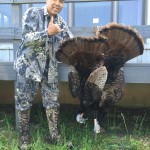 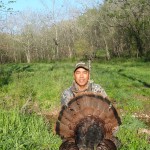 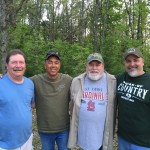 View all posts by siteadmin → 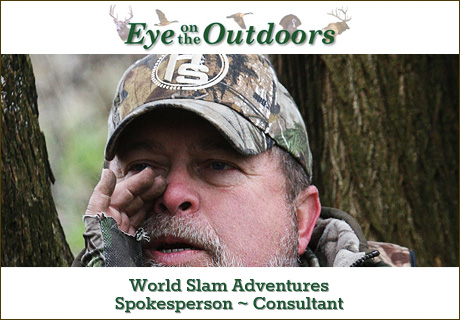 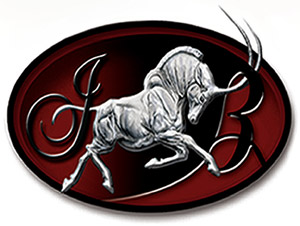